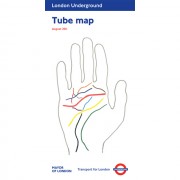 The latest art commission by ‘Art on the Underground’ for the front cover of the Pocket Tube Map, is now available from Tube stations. The work is a tracing of the artist’s own hand in pencil; the creases and lines of the hand are represented by lines drawn in the various colours of the Tube map. In this way, Landy makes a direct relationship between ‘the artist’s hand’ and the Pocket Tube Map. We can read his palm and see how his personal journeys have left their mark there. Reproduced as a pocket artwork for millions of Tube travellers to hold in the palm of their own hands, the work has a humorous yet uncanny quality.

Head of Art on the Underground, Tamsin Dillon, said: “I like the way that Landy brings us back to the physical workings of the Tube Map. His reference to the way that people write on their hands as an aid memoire is very much in contrast to current handheld technology – like GPS and Google Maps. We like to provide travel information to passengers in as many different formats as possible. The Pocket Tube Map is a traditional, ‘hands-on’ guide, which is still a great way to get around the London Underground system.” 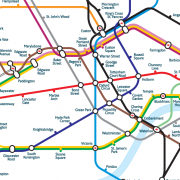 A brand new Geographical London Tube Map has been designed. The new map is the work of Mark Noad and he has posted the map online and plans to launch an iPhone app in the coming days. We think the map is genius! It greatly improves on the original tube map.

You can view the new map in all it’s glory at Mark’s website www.london-tubemap.com. You can also download a large PDF version of the map.

Mark Noad added ‘There are twice as many lines with London Overground and the DLR. When Beck was drawing up his map, the Circle line was the focus but that has now moved away and you have places such as Canary Wharf. This is not intended as a replacement to the official version – it is simply another way to look at it.’

The original London Underground diagram, designed by Harry Beck is one of the greatest designs of the twentieth century. He rationalised and clarified a complex system to produce a simple, easy to follow piece of information graphics. The principles he established for the diagram are still in use today.

However, in 1931 when it was first used, there were only seven lines so the compromises Beck made on geographical accuracy did not matter greatly. Today, with the constant development of the diagram now accommodating twice as many lines, these inaccuracies are more of a problem. Indeed, they form the basis for a major criticism of the diagram, that it bears little or no relation to London at street level.
This is particularly the case with newer lines especially London Overground which has been shoe-horned in leaving stations nowhere near their neighbours, for example: Watford and Watford Junction; Archway and Upper Holloway; Seven Sisters and South Tottenham; South Acton and Chiswick Park.

The map illustrated here is an attempt to see if it is possible to create a geographically-accurate representation of the underground system while still retaining some of the clarity of Beck’s original diagram.