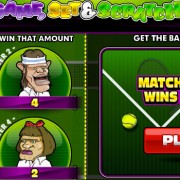 Game, Set & Scratch uses a 2×3 grid, and the goal of the game is to reveal three like tennis players anywhere on those squares. Since those odds are a little low for the average scratch card, Game, Set & Scratch also has a second game. Match Point is simply a win-or-lose proposition, but it wins and pays out at least the face value at such a high frequency that it makes the card quite lucrative overall.

Game, Set & Scratch is playable for real money and in a free practice mode. Clicking the New Card button is required to initiate the game and each subsequent round. The pay table is viewable via the View Payout button, and the plus and minus signs adjust the stake. The game has a Reveal All button, or the player can opt to reveal each aspect of the scratchie individually.

Game, Set & Scratch is a lucrative scratch-off that plays reasonably fast and is a great deal of fun. The game is available at Ladbrokes in instant play mode, so it worth sampling in arcade mode. If you decide to stick around and play for real, Ladbrokes Casino will match your first deposit of £5 or greater by 100 per cent up to £500.

You’ll be laughing all the way to the bank if you win the jackpot on the new Monty Python inspired scratch card from Paddy Power Casino. The card is called Spamalot, based on the hit musical from the Monty Python boys. The musical was ripped off from the hit comedy film ‘The Holy Grail’ which featured many of the classic comedy moments we all know and love.

The scratch card has most of the characters from the film: including the Black Knight, the rude French Archer and the poor Witch… Burn Her! However the prizes on this card are no laughing matter! The top prize is an eye watering £200,000k, to win that amount you will have to risk £20 per card. Don’t worry if you think £20 is a little steep, because you can choose how much you’d like to gamble. For instance if you choose to bet £5 per scratch, that will reduce the jackpot but you could still win £50,000. Play for 50p and the jackpot is £5,000. I prefer to play for £1 per card, that way you get plenty of chances to win and the jackpot is a cool £10,000.

It’s worth remember that a welcome bonus is available to all new players at Paddy Power Casino, so get over their and play the scratch card with a sense of humour and a massive jackpot. 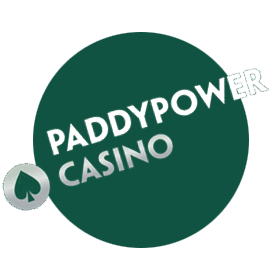 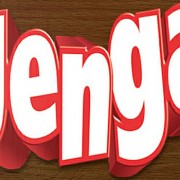 In the classic game Jenga, players gracefully remove wooden blocks from a self-standing tower. As each block is removed the structure begins to tilt and sway, until one unlucky player causes the entire tower to come down with a thundering crash. However, in the online cash game Jenga from Paddy Power Games, the player’s objective is quite the opposite! You’ll be hoping that the tower comes crashing down and you can cash in on the jackpot.

Jenga’s gameplay is very similar to that of a classic slot machine. You bet on various lines (unfortunately your only two choices are 9 or 18 lines) of the Jenga tower in the hopes that 3 colored bricks of the same color will match on that line. A match removes bricks from the tower and add them to the top of the structure. Remove enough bricks and you can cause the tower to topple, generating a free game play!

During gameplay other special blocks can appear to add some variety to the game. Magic blocks (which look like a psychedelic mood ring) transforms all the blocks it touches into a single color, greatly increasing your chances of several color matches. Layer bombs come in red, yellow, and green forms and will destroy and rebuild two, four, or eight levels of the tower, respectively, when activated. Payouts are also based on colors, with the highest payouts going to matches of blue (100), white (50), or red (25) bricks. One final note on colors: if you get bored with the background, just click to change it!

During my time playing the game, I had greater success when betting on all 18 lines. It also got very exciting when I’d match several bricks on the initial play, triggering bonus bricks on the top of the tower, and then having these bricks match for even more winnings! There were also some times when I wanted to jiggle the monitor of my computer screen just hoping for the tower to collapse and earn a free game!

Paddy Power Games currently has a promotion for new players that bet 2 euros can get 2 euros free. And you can always give the game a try for free before playing for real cash. So why don’t you sign up and give Jenga a try? 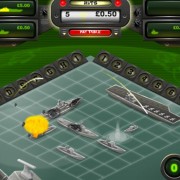 “You Sunk My Battleship!”

This line often accompanied many a fun night when we were kids. Online gamers with nostalgia for old-school Milton Bradley titles like Battleship will surely love Battle Cash Bonanza. The cash betting game brings some accuracy, speed and timing challenges to the classic guessing game. The board for Battle Cash Bonanza looks identical to a Battleship board, with rows titled 1 through 9 and columns titled A through I. However, instead of the traditional hidden ships, you see the ships moving about in plain view. Additionally, instead of playing against your friends, you’re playing against your wallet.

Like slots, you will be trying to anticipate where and when to click to make the most money. In Battle Cash Bonanza, your goal is to hit as many ships as possible. The ships used in BCB are similar to the ships in the old-school Battleship game. You have the five-square long carrier, the four-square long battleship, the three-square long destroyer and other ships. Destroying the bigger ships takes more shots, but your payout is larger in the long run.

In Battle Crash Bonanza, each shot costs money. You will therefore want to sink ships in as few shots as possible. You receive a payout if you get a hit and a bigger bonus if you manage to sink an entire ship. The strategy comes because your cannon shots are time-delayed. A good sense of ballistics and time estimation will serve you well in Battle Cash Bonanza.

Battle Cash Bonanza is an addicting game, even if it is relatively simplistic. The goal is to shoot moving targets with virtual cannonballs and ultimately, to sink a jackpot. You will make strategy choices such as whether you want to go for the smaller boats that take less shots to sink but yield comparatively smaller jackpots or whether you want to take in the big carrier or battleship hauls.

Because the aiming and shooting system is not as precise as it could be, Battle Cash Bonanza is not going to be anybody’s regular money-maker. This would have to be the only downside to the game – it sometimes feels more luck-based than skill-based. Despite this, Battle Cash Bonanza is a fun game that is at least easy enough to play until you recoup your losses. Betting real money with each shot adds a fun edge to the classic childhood game.

Accompanying dozens of other cash games at the Ladbrokes Games website, Battle Cash Bonanza is a great way to spend time. At the very least, it will provide you with hours of amusement as you develop your virtual naval shooting skills. Avast and ahoy, and sink a jackpot today!