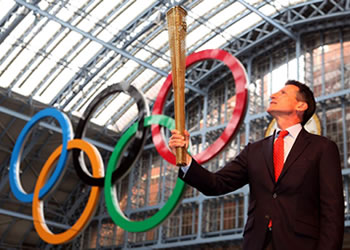 The final stage of the journey of the Olympic Torch, to light the Olympic Flame for London 2012, will begin on May 19th 2012 after it is flown from Greece the day before. The Torch will travel approximately 8000 miles and take in landmarks around Britain, before it finally arrives in London for the games Opening Ceremony. The journey will take at least 70 days and 8000 chosen torchbearers will carry it from Land’s End in the South West of England through every county in England and all local authority areas in Scotland, Wales and Northern Ireland. The route will be less ambitious and also less expensive than the international route the flame took to the last games in Beijing in 2008. LOCOG chairman, Sebastian Coe told reporters “We just wanted to be creative about it” and the plan is to use a variety of modes of transport. The flame will conveyed by canal boat, steam train, cable car, hot air balloon and even a motorcycle sidecar on the Isle of Man TT course. In Wales the flame will be taken to the summit of Mount Snowden, at 1085 metres above sea level, the highest point on it’s journey to the Olympic Stadium. Although perhaps not as dramatic as 2008 when the Chinese took the flame up Mount Everest, there has been no lack of creativity in planning it’s journey. It will be skated across an ice rink, abseiled down a tower, taken by chair lift and carried on a mountain railway on it’s way to the games Opening Ceremony.

The planned route of the torch relay means it will pass within one hour of 95 percent of the population. The details released so far do not include anywhere outside Britain, however they may eventually include a diversion from Northern Ireland to Dublin in the Republic, to highlight the Peace Process. “We are now really working through the feasibility of this” said Coe, “For all sorts of reasons I am very keen for it” [to go to Dublin]. “That’s not going to eat into any of the time we had allocated for England, Scotland, Northern Ireland and Wales, this will be additional time and it is likely to be hours”. Before the torch arrives in London it will take in 1018 villages, towns and cities. Coe said organisers were working closely with the Metropolitan Police and other local forces to ensure the torch would be secure along the route. He said he was confident they would strike the right balance between security and allowing as many people as possible to be involved in the event.