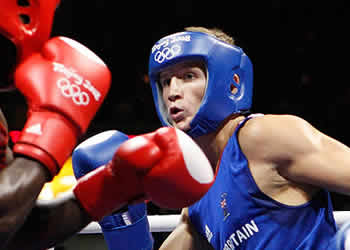 The sport was introduced to the ancient Olympic Games by the Greeks in the 7th century BC, when soft leather thongs were used to protect boxer’s hands. The ‘cestus’, a metal studded glove, was later introduced by the Romans but with the fall of the Roman Empire the sport came to an abrupt end. Boxing resurfaced in England in the 17th century and amateur boxing officially began in 1880. The first ‘modern’ Olympic Boxing competition took place at the 1904 games in St Louis USA, when as the only country entered in the competition, the Americans took all the medals. The Americans continued to dominate in Olympic Boxing events closely followed by the Russians and Cubans. Boxing has been included in every Olympic games since, with the exception of the 1912 Games in Stockholm, when Swedish Law did not permit the sport. In recent years new rules have been introduced and boxers must now wear protective helmets, in 1992 in the Barcelona games an electronic scoring system was introduced, as was standardised point scoring in 2007.

The London 2012 Olympic Games will hold the first ever Women’s boxing competition, bouts will be held over four rounds of two minutes each with medals in three weights: Fly Weight, Light Weight and Middle Weight. The Men’s competition will feature 10 weight categories ranging from Light Fly Weight to Super Heavy Weight over three, three minute rounds. The Olympic boxing events run in a knockout format, the winners of the two semi-finals in each weight category, meet to decide the Gold medal position, with the losers of the two semi-finals awarded a bronze medal. All bouts at London 2012 will be held at the ExCel Arena, Royal Victoria Dock, London.

GB Hopefuls.
Luke Campbell from Hull has to be one of GBs brightest hopes for a Gold medal. The 23 year old missed out on a place at the Beiijing games but won Gold at the European Championships in 2008, becoming the first Englishman to do so since 1961. A strong GB boxing team which includes Fred Evans and Andrew Selby from Wales, Charlie Edwards, Khalid Yafai and Tom Stalker, should have a great chance of a clutch of medals in front of the home crowd.

Chantelle Cameron, the 20 year old from Northampton, had her first boxing bout in 2009. A successful international Kickboxer, Chantelle made a whirlwind start in boxing when in 2010 she won the National Senior Amateur Boxing Association Championship at her first attempt.

Nicola Adams is ranked third in the world in her weight category and recently said “The minimum aim is a medal but there’s no reason why I can’t become Olympic champion. I am very confident”.